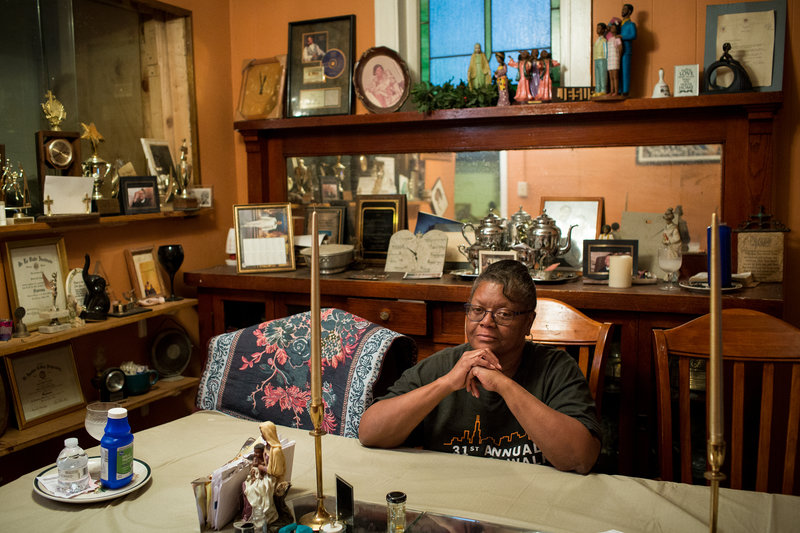 For months, Rev. Falicia Campbell kept a secret from her congregation, her friends and even her adult children. It was a secret she was ashamed to divulge: She was living without running water.

Like a growing number of Americans, the 63-year-old Chicago resident couldn't afford to pay her rising water bills. She inherited her mother's house in Englewood, a poor neighborhood on the city's South Side, and last year received a $5,000 bill.

Campbell is partially blind and lives on a fixed income from disability payments. She dedicates most of her time to helping her community. Her church includes a resource center that provides food and shelter for poor and homeless people.

She couldn't pay off her water debt, and in August her water was turned off. The Chicago water department offered her a payment plan but required a more than $1,700 deposit before restoring her water. She didn't have it.

Here she was living a few miles from Lake Michigan, one of the largest sources of fresh water in the world, and she didn't have running water in her house. Without it, her daily life became a struggle.

"I just said, 'Oh God, whatever I did, forgive me,'" Campbell said. "This was a lesson. I had my lights off before, my gas off. But water, I didn't realize how important water was until I didn't have it."

Campbell is a victim of a growing American water crisis. In cities across the country, the cost of water has spiked in recent years, forcing hundreds of thousands of people to perilously endure weeks or even months without an essential resource.

The crisis is especially acute where you would least expect it – the Great Lakes, the region of the country with the most abundant fresh water.

A nine-month investigation by APM Reports examined the cost of water in six large cities near the Great Lakes – Chicago, Cleveland, Milwaukee, Detroit, Buffalo and Duluth – over the past 10 years and found that rates have risen alarmingly fast. In Chicago, the cost of water for the average family of four nearly tripled between 2007 and 2018. Cleveland's rates more than doubled – to $1,317 per year for an average family of four. And families in Detroit paid an astounding $1,151 annually. By contrast, that same average family living in Phoenix, which pipes in much of its water from 300 miles away and has been called the least-sustainable city in the country, paid about two-thirds less.

Many cities have been forced to raise rates to deal with decrepit infrastructure – leaking, cracking water pipes that in some places date to the 19th century. With the federal government allocating less money for water infrastructure, most cities have foisted the bill on to their customers, especially those who can least afford it.

The APM Reports investigation found that the rising cost of water has hit poor families the hardest; the government-run water utilities in these six cities have issued at least 367,740 shut-off notices in the past decade. And an analysis of shut-off data revealed disproportionately high concentrations of water shut-offs in poorer areas and in majority black and Latino neighborhoods in every city.

Unlike more visible infrastructure problems – such as electrical blackouts, dangerous bridges or clogged highways – wealthier Americans may not even know that water prices have spiked. But for millions struggling to afford water, or living without it, the crisis can be life-altering.

For months, Campbell's basic tasks like doing the dishes or getting ready to leave the house became expensive and arduous. To bathe each morning, she had to pour gallons of bottled water into a pot to heat on a stove. She then carried the water up the steep stairs to the second floor and dumped it into the bath tub. She made the trip multiple times until she had enough water to take a bath. Then she'd use the water for the toilet. By the time she was on her way to her church, she was already exhausted. And there was a financial burden too: She was having to spend $20 a week on bottled water.

"There's an old saying you never miss your water until the well runs dry. And I found that out. It's very difficult to get around without water," Campbell said one day last October. By then, her water was back on. With the help of friends and family, it had taken her a month to come up with the deposit demanded by the Chicago water department. She's enrolled in a $120.93 monthly plan. If she's lucky, she'll pay off her debt by September 2021.